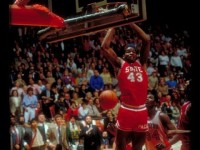 March 11, 1983, Atlanta’s Omni Arena: “After Lo hits these two free throws I want us to guard the inbound pass, but don’t foul.” The starting five for N.C. State’s basketball team broke from the huddle and walked toward the free-throw lane. At the last second, Coach Jim Valvano is rumored to have pulled point guard Sidney Lowe aside and whispered, “If Lo misses these two shots I want you to…”

That Friday night in Atlanta, freshman Lorenzo Charles and N.C. State needed a confidence boost. State’s chance to secure an NCAA bid rested in the hands of a freshman, a player whose free-throw average stood at 67.6%. Odds were that Charles would miss at least one of the shots. Maybe both. He’d never gone to the line with the outcome of a game resting in his hands. Valvano knew Lorenzo Charles needed a shot of confidence, so the coach told the players how to react after Charles made his free throws.

King Asa needed a boost of confidence too. Though he’d served God and prospered during a reign of peace, the king’s men—armed only with large shields, bows, and spears—faced “a vast army and three hundred chariots.” Asa knew the risk of fighting alone. He needed help. “We rely on you,” he cried out to God. “You help the powerless. There is none like You. You are our God.”

We’re prone to think that we can win on our own strength, but our legs grow weary and our nerves fray. We squander our chances for victory, advancement, and promotion by accepting God’s accolades as our own. All work is a team sport. Family, friends, and co-workers cheer us on in our profession. They remind us that we are more than the sum of our past; they believe that we can do better and that today, we will.

Charles’ first attempt missed the rim—wasn’t even close. But his second shot fell through the net and State advanced to the next game. The following week State was crowned ACC Champions, received an NCAA bid, and eventually won the national championship all because of Lorenzo Charles’ last-second dunk.

What recent defeat prevents us from believing in God’s goodness? What disease, financial setback, or broken relationship threatens to crush our confidence and causes us to cower in fear? God has placed us in His starting line up for a reason. He expects great things of us. When no one else believes we can, God does.

Today let us advance with confidence: we play for an awesome God.

Reprinted from My Father’s Business