Scotch whisky to a Scotchman is as innocent as milk is to the rest of the human race. In Swinton’s case it was a virtue and not an economical one. Twenty-four dollars a week would really have been riches to us if we hadn’t had to support that jug; because of the

jug we were always sailing pretty close to the wind, and any tardiness in the arrival of any part of our income was sure to cause some inconvenience.

I remember a time when a shortage occurred; we had to have three dollars and we had to have it before the close of the day. I don’t know now how we happened to want all that money at one time; I only know we had to have it. Swinton told me to go out and find it and he said he would also go out and see what he could do. He didn’t seem to have any doubt that we would succeed but I knew that that was his religion working in him; I hadn’t the same confidence; I hadn’t any idea where to turn to raise all that bullion and I said so.

I think he was ashamed of me, privately, because of my weak faith.

He told me to give myself no uneasiness, no concern; and said in a simple, confident and unquestioning way, “The Lord will provide.” I saw that he fully believed the Lord would provide but it seemed to me that if he had had my experience—But never mind that.

Before he was done with me his strong faith had had its influence and I went forth from the place almost convinced that the Lord really would provide.

I wandered around the streets for an hour, trying to think up some way to get that money, but nothing suggested itself. At last I lounged into the big lobby of the Ebbitt House, which was then a new hotel, and sat down. Presently a dog came loafing along. He paused, glanced up at me and said with his eyes, “Are you friendly?” I answered with my eyes that I was. He gave his tail a grateful wag and came forward and rested his jaw on my knee and lifted his brown eyes to my face in a winningly affectionate way. He was a lovely creature, as beautiful as a girl, and he was made all of silk and velvet. I stroked his smooth brown head and fondled his drooping ears and we were a pair of lovers right away.

Pretty soon Brig.-Gen. Miles, the hero of the land, came strolling by in his blue and gold splendors, with everybody’s admiring gaze upon him. He saw the dog and stopped, and there was a light in his eye which showed that he had a warm place in his heart for dogs like this gracious creature; then he came forward and patted the dog and said,

“He is very fine—he is a wonder; would you sell him?” I was greatly moved; it seemed a marvelous thing to me, the way Swinton’s prediction had come true.

The General said, “What do you ask for him?” 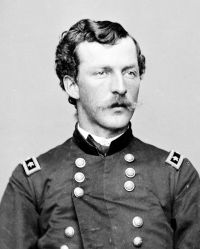 The General was manifestly surprised. He said, “Three dollars? Only three dollars? Why that dog is a most uncommon dog; he can’t possibly be worth less than fifty. If he were mine, I wouldn’t take a hundred for him. I’m afraid you are not aware of his value. Reconsider your price if you like, I don’t wish to wrong you.”

But if he had known me he would have known that I was no more capable of wronging him than he was of wronging me. I responded with the same quiet decision as before.

“No, three dollars. That is his price.”

“Very well, since you insist upon it,” said the General, and he gave me three dollars and led the dog away and disappeared upstairs.

In about ten minutes a gentle-faced, middle-aged gentleman came along and began to look around here and there and under tables and everywhere, and I said to him, “Is it a dog you are looking for?”

His face had been sad before and troubled; but it lit up gladly now and he answered, “Yes—have you seen him?”

“Yes,” I said, “he was here a minute ago and I saw him follow a gentleman away. I think I could find him for you if you would like me to try.”

I have seldom seen a person look so grateful, and there was gratitude in his voice too when he conceded that he would like me to try. I said I would do it with great pleasure but that as it might take a little time I hoped he would not mind paying me something for my trouble. He said he would do it most gladly—repeating that phrase “most gladly”—and asked me how much.

He looked surprised, and said, “Dear me, it is nothing! I will pay you ten, quite willingly.”

But I said, “No, three is the price,” and I started for the stairs without waiting for any further argument.

Swinton had said that that was the amount that the Lord would provide and it seemed to me that it would be sacrilegious to take a penny more than was promised.

I got the number of the General’s room from the office clerk as I passed by his wicket, and when I reached the room I found the General there caressing his dog and quite happy. I said, “I am sorry, but I have to take the dog again.”

He seemed very much surprised and said, “Take him again? Why, he is my dog; you sold him to me and at your own price.”

“Yes,” I said, “it is true—but I have to have him, because the man wants him again.”

The General looked even more surprised than before, and for a moment he couldn’t seem to find his voice; then he said, “Do you mean to tell me that you were selling another man’s dog—and knew it?”

“Then why did you sell him?”

I said, “Well, that is a curious question to ask. I sold him because you wanted him. You offered to buy the dog; you can’t deny that. I was not anxious to sell him—I had not even thought of selling him—but it seemed to me that if it could be any accommodation to you—”

He broke me off in the middle, and said, “Accommodation to me? It is the most extraordinary spirit of accommodation I have ever heard of—the idea of your selling a dog that didn’t belong to you—”

“Oh, what in the world has that to do with it! The crux of the matter is that you didn’t own the dog—can’t you see that? You seem to think that there is no impropriety in selling property that isn’t yours provided you sell it cheap. Now then—”

I said, “Please don’t argue about it any more. You can’t get around the fact that the price was perfectly fair, perfectly reasonable—considering that I didn’t own the dog—and so arguing about it is only a waste of words. I have to have him back again because the man wants him; don’t you see that I haven’t any choice in the matter? Put yourself in my place. Suppose you had sold a dog that didn’t belong to you; suppose you—”

“Oh,” he said, “don’t muddle my brains any more with your idiotic reasonings! Take him along and give me a rest.”

So I paid back the three dollars and led the dog downstairs and passed him over to his owner and collected three for my trouble.

I went away then with a good conscience, because I had acted honorably.

I never could have used the three that I sold the dog for, because it was not rightly my own, but the three I got for restoring him to his rightful owner was righteously and properly mine, because I had earned it.

That man might never have gotten that dog back at all, if it hadn’t been for me. My principles have remained to this day what they were then. I was always honest; I know I can never be otherwise. It is as I said in the beginning—I was never able to persuade myself to use money which I had acquired in questionable ways.

Now then, that is the tale. Some of it is true.