I am the Amen, the faithful and true witness. I am the ruler of God’s creation. Revelation 3:14

I know you your deeds, that you are neither hot nor cold. Where is your passion, your zeal, your love for me? You have my words, but you do not believe. You claim to love others, but you do not warn them to turn from their sins, come to me, and be saved. You are like clouds and wind that do not bring rain. When people will not endure sound teaching, you give them what their itching ears long to hear. I warn you, a judgement is coming on those who pervert the grace of my Father.

I wish you would reject me outright or love me with all your heart, mind, and soul, but since you seek to avoid offending both man and God I am about to vomit you out of my mouth. Revelation 3:15-16

Put salve on your eyes so you can see your shameful nakedness and cover yourself. Revelation 3:18

Be earnest. Repent! Here I am, knocking, trying to get your attention. Open the door! Revelation 3:19-20

If you wake up and return to the love you once had, I will give you the right to sit with me on my thrown.

Even the very smallest thing that we allow in our lives that is not under the control of the Holy Spirit is sufficient to lead to spiritual confusion. But as soon as we obey the Holy Spirit, we have discernment. – Oswald Chambers

These are my holy and true words. My Father has placed on my shoulder the key of the house of David. What I open no one can shut, and what I shut no one can open. As in the days of my servant, Eliakim son of Hilkiah, my Father has clothed me with a robe, fastened a sash around me, and given me his authority. I will be a father to those who live in Jerusalem, to the people of Judah, and throughout the world.

I have placed before you an open door that no one can shut.

Since you have kept my word and my commands and have not denied my name, but rather have endured patiently, I will also keep you from the hour of trial that is coming to test those who live on the earth.

Hold on to what you have so that no one will take your crown.

He who overcomes I will make a pillar in the temple of my God. Never again will he leave.

Hear with your listening ears to what the Holy Spirit says to the faithful church that endures to the end.

The very character we exhibit in our present surroundings is an indication of what we will be like in other surroundings. Oswald Chambers

These are the words of the Son of God, whose eyes are like blazing fire and whose feet are like burnished bronze.

Nevertheless, I have this against you: You tolerate that woman Jezebel, who calls herself a prophet. By her teaching this Jezebel in your midsts misleads my servants into sexual immorality and the eating of food sacrificed to idols. She follows in the ways of her predecessor who:

This the one you welcome into your midst.

I have given her time to repent of her immorality, but she is unwilling, so I will cast her on a bed of suffering. I will make those who commit adultery with her suffer intensely, unless they repent of her ways. I will strike her children dead. Then all the churches will know that I am he who searches hearts and minds, and I will repay each of you according to your deeds.

To those of you who do not hold to her teaching and have not learned Satan’s so-called deep secrets, I say hold on to what you have until I come.

To the one who is victorious and does my will to the end, I will give authority over the nations. I will also give that one the morning star. Whoever has ears, let them hear what the Spirit says to the churches.

It is inconceivable, but true nevertheless, that saints are not “bringing every thought [and project] into captivity,” but are simply doing work for God that has been instigated by their own human nature, and has not been made spiritual through determined discipline. – Oswald Chambers

These are the words of him who has the sharp, double-edge sword.

I know where you live–where Satan rules. Yet you remain true to my name. You have not renounced your faith in me, even as your friends and my faithful witnesses are now persecuted in your city–the place where Satan resides.

Nevertheless, I have a few things against you: You tolerate those who hold to the teachings of Balaam. They seek to entice you and others to sin by indulging in sexual immorality. Before such gods, men and women kneel, offer their bodies, and encourage others to participate in such perverse behavior.

Expose such individuals before the Lord so that his fierce anger may turn away from you.

Likewise, you accept those who compromise and teach that God’s grace grants willful idolatry and immorality. Repent! If not, I will soon come to you and fight against them with the sword of my mouth which is the Word of God.

To him who overcomes I give some hidden manna and a white stone with a new name written on it.

God makes us holy in the sense that he has made us innocent before him. Oswald Chambers

To the church leaders in the proud and beautiful city I say this:

My words are the First and Last. My words are from the one who died and came to life again.

I know your afflictions. I too was afflicted for your sake.

I know your poverty. I had neither home nor possessions.

I know the slander of those who say they are righteous and without blame but are not. I too suffered slander and was told that I was possessed by Beelzebul: that by the prince of demons I drove out demons. Those who say such things are of the synagogue of Satan.

Do not be afraid of what you are about to suffer. Remember that when I was with you I warned that you would be hated by everyone because of me. You will be handed over to local officials and flogged. You will be brought before governors and rulers as witnesses to them. Your brother, sister, father and mother will turn you in. This is only the beginning.

I tell you, the devil will put some of you in prison to test your love for me. You will suffer persecution for my name’s sake.

Be faithful even to the point of death. Afterwards, I myself will place the crown of life on your head.

We can never fight against sin. The conflict is waged over turning our natural life into a spiritual life and that is only accomplished through a series of moral choices. – Oswald Chambers 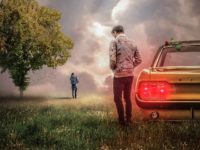 These are the words of the one who holds the seven stars (keys) in his right hand and walks about in the rooms and halls and sanctuaries of the seven churches.

I know your deeds. You work hard! You persevere. You reject wicked men and will not tolerate their wickedness. You test those who claim to be followers of me but are not, and when found to be false, you cast them out. You suffer hardship for my name and do not grow weary.

And yet you do not love me!

Not like you did at first. Not as you claim. Remember the passion, the joy, the all-giving love you had for me when we first met? Remember the way you would sit and listen for hours while I spoke with you, the way you hung on my every word. How you would long to be in my presence. At first you would do anything for me: not out of duty, but out of delight.

Turn and go back to those moments when you fell in love with me.

If you do not, I will remove your lampstand and lock your doors. Love me with all your heart, all your mind, and all your soul. Only then will your works in my name draw others to me.