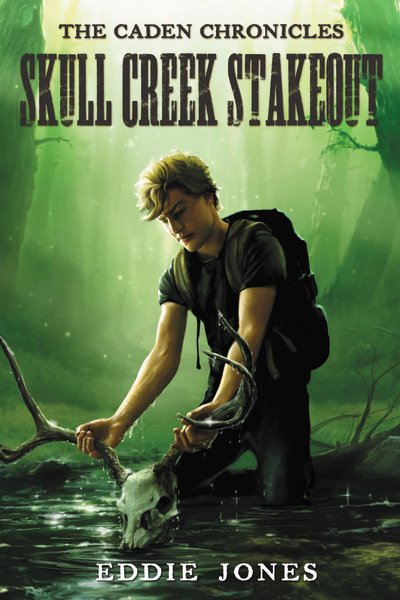 Author Eddie Jones Takes Readers to Transylvania in the Newest Book in the Suspenseful YA Series, The Caden Chronicles

After barely making it out alive in last year’s Dead Man’s Hand, Nick is now a reporter for the paranormal news website, Cool Ghoul Gazette. His latest assignment is to investigate a mysterious murder in the notoriously haunted town of Transylvania, North Carolina. What’s even more eerie, the murder looks suspiciously like a vampire killing.
Skeptical that a place like this actually exists outside of a Bram Stoker novel, Nick arrives and encounters several strange characters who make his obsession with analyzing crime TV shows seem normal.

Nick learns that Transylvania is the home of vampirologists, vampire slayer gamers, and those who apparently go so far as to dress up dead bodies as  vampires to fool authorities Anyone of them could be the killer he seeks.

To track down the real culprit, Nick enlists the help of Meg, the local coroner’s assistant.  She  becomes his greatest ally, but the closer the two get to cracking the case, the more dangerous it becomes.  Little do they know someone is following their every move!

Will Nick be able to find out who’s behind this terrifying crime before the murderer strikes again? Are he and Meg next on the killer’s list?

With SKULL CREEK STAKEOUT, Jones pens a gripping plot that blends themes including the history of vampirism and our common infatuation with death and immortality.

Fast-paced and filled with twists and turns, the book will keep readers guessing until the very last page. Endlessly captivating, this newest paranormal chase in the series will have tween and young adult readers anticipating what’s next for Nick and The Caden Chronicles.

ABOUT THE AUTHOR: Eddie Jones is the author of nine books, including last year’s first title in The Caden Chronicles series, Dead Man’s Hand, which made the 2013 INSPY Awards shortlist in the category of Literature for Young People. A three-time winner of the Delaware Writers Conference and recipient of the 2011 Selah Award for Young Adult fiction for his novel, The Curse of Captain LaFoote, Jones is also a writing instructor and the cofounder of Christian Devotions Ministries.  He lives in Raleigh, North Carolina. www.eddiejones.org

To request an interview with Eddie Jones or to receive a review copy of SKULL CREEK STAKEOUT, please contact Candice Frederick at DJC Communications: 212-971-9707, Candice@djccommunications.com.

Zonderkidz™, a division of Zondervan, inspires young lives through imagination and innovation. As the leader in Christian children’s communications, it produces bestselling and award-winning Bibles, books, board books, graphic novels, audio, video and digital products that awaken the hearts and touch the souls of kids under 16 and the people who love them, from family members to educators. Zonderkidz is the publisher of the NIrV (New International Reader’s Version) Bible translation, the third-grade reading level edition of the NIV that is ideal for children and those who speak English as a second language. Visit Zonderkidz on the Internet at www.zonderkidz.com.

Zondervan, a HarperCollins company, is headquartered in Grand Rapids, Michigan, and is a world leader in Christian communications and the leading Christian publishing brand. For more than 75 years, Zondervan has delivered transformational Christian experiences through general and academic resources authored by influential leaders and emerging voices and has been honored with more Christian Book Awards than any other publisher.