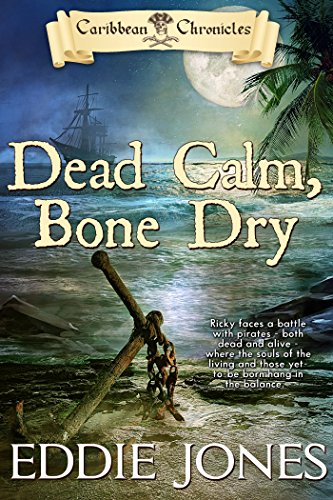 Just as Ricky is about to be tried for piracy, an ill wind blows a wretched soul into the ship’s brig. A mysterious seaman, William Shakespeare, tells of fleeing the Flying Dutchman, a ghost ship sailed by the dead, demons and worse. Before Ricky can learn more about this outlandish tale, he’s hauled to the gallows. As the hangman is about to tighten the noose around Ricky’s neck, the young man bolts from the gallows and dives head-long into the sea.

Now, with the lives of a crew of misfit orphans in peril and the heart of the governor’s daughter on the line, Ricky faces a battle with pirates – both dead and alive – where the destiny of the living and those yet-to-be born hang in the balance.

Will he reach his deceased father before it s too late? Or will both father and son face eternal damnation due to Ricky’s bitter heart?

That’s the back cover copy. Hope it tells enough of the story to capture a reader’s imagination. What I’m really excited about, though, is the cover. The canvas has everything a pirate like me wants.

Rusty Anchor (Used to be an old bar by that name in Pamlico County. Drove by it every time I went to my boat.)

Full moon (Helps to have full moon when sailing at night – unless you’re sailing by the stars.)

Palm tree (Good for hanging a hammock or stealing coconuts.)

Ghost ship (That’s the Flying Dutchman – notice how you can sort of see through it.)

Calm sea (Sailor’s want wind, but not waves – hard to get that combo.)

Waves near shore (Perfect for those pirates who surf – like me.)

Treasure chest (You can sort of see it there in the water.)

Wooden skiff (On the right side of the cover – it’s waterlogged and probably doesn’t float, but shipwrecked pirates can’t be choosy.)

Series title (This is the second book in the Caribbean Chronicles series – the first released, like, four years ago.)

An island on the horizon (Pirates always need a place to sail to – we can’t stay in one port for long.)

All-in-all I’d say this is a killer cover. Great job, Elaina! And a great book for boys and young men who enjoy action-adventure, pirate stories. Good, clean read without any bad language or other stuff mom’s don’t like.

Readers are Leaders, Buy a Boy a Book